Easy day today as I was staying at my sister and brother in law's house Jane and Chris in Dumfries and the whole day was only 55 miles. I'm here now having a beer and just about to eat a bucket full of spaghetti Bolognese. I was caught in a few heavy showers today, nothing too serious and the going was good with only a few big hills for my legs to complain about. Stopped at the local bakers in a village called Dalston where I had a great chat with the two ladies behind the counter. Turns out they were also cyclists and had just completed a coast to coast ride. West to East. They were a great laugh and the food was great specially the mince and onion pie with mushy peas in it. What a top idea! Then carried on up the road to Gretna Green where another milestone was passed, photo taken with pride and I crossed over into Scotland. That felt good I have to say and brought a big smile to my face. Finished ride in Lockerbie and was transported from there to Dumfries by Jane and will be dropped off at the same spot in the morning. Heading towards Edinburgh in the morning so I hope the weathers good. Forgot to mention I was totally cut up by what looked like Jabba the Hut in a 4x4 just outside Preston. He got the Geordie salute as well, as the force was definitely not strong with that moron. Anyway off for food and feeling good. 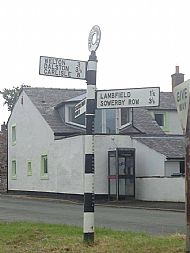