After a great night catching up with Jane and Chris is was back on the road again this morning. Chris dropped me off where Jane had picked me up from the previous night and away I went. Both calfs and both knees now have support bandages on them.  Gill and Ian reckon by the time I get to the finish line I will look like The Mummy, they could be right!
Setting off from Lockerbie I followed the M74 for about 15 miles on a gloomy overcast day. I hate cycling next to motorways because of the noise and smell but you do knock off the miles quickly.  Stopped off at a village on the way where I found somewhere that sold bacons sarnies and tea and filled my boots.  Then some bloke came in and started banging on about the EU Referendum. Having already voted by mail before I left, one of the reasons I chose to do this challenge at this time was to avoid the build up to Thursday and all the bull from both sides and here I was, there was no escape. I could have just walked out but I was sneakily borrowing some electricity for my iPhone and satnav! The other reason I started when I did is because I got a I cheap flight to Newquay😁
Eventually the bloke left when he realised no one was listening to him and all was calm again.
Off I cycled through the rain (somehow managing to get smacked in the face by the branch of a tree.. Nice) taking pictures of the lovely green landscape until I ended up in Livingston. Forgot to say I had to buy a new gel seat as my old one decided enough was enough! Can't blame it I suppose.
Over the big bridge in the morning and off up into the highlands...oh yeah 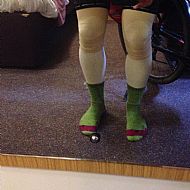 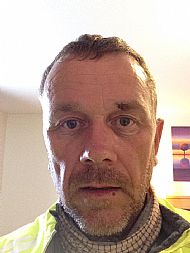