Today was one of those special days where everything came together in a really good way. The weather was sunny all day with no wind. The body and bike were both behaving themselves and the scenery again was breathtaking. To sum up, a perfect day😀

I set off from Pitlochry in fine fettle early in the morning. The main street was almost deserted as I cycled out of the village. I've always liked Pitlochry, it's one of those places where you can relax and let the world go by. Another plus is the fish and chips are the best I've tasted.

Anyway, after Blair Atholl the landscape opened up and was so beautiful as I cycled through it. The first big hill was the Drumochter pass. This brings back so many happy memories of last years charity cycle ride that went over this pass but In the other direction. I remember flying down the hill next to Sian, when a glowing red screaming missile in the form of Ian travelling at Mach 2 sped passed us. Still don't know how he managed to go so fast! Another laugh from that ride was when Shaun the vicar was lost and phoned Gill. Gill tries to answer her phone and falls of her bike (Father Ted moment) When Gill recovers and asks Shaun what he wants he replies "Gill, where am I" ?? You can probably work out what the reply was so I won't go there!

The second big summit was Slochd. Have to say my legs didn't like this hill but the good bit was it was more or less downhill all the way to Inverness.😀

Forgot to mention I was coming out the Coop yesterday in some place I can't remember when I noticed a homeless man sitting under a sleeping bag looking miserable. I took pity and offered him my Tuna pasta salad. He looked at it and said "I don't like Tuna mate" and gave it back to me. I had a think and gave him a few quid instead and I ended up eating the pasta reject meal myself. There's a joke in there somewhere me thinks. 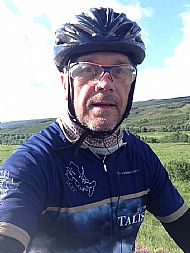